Our Cruise to Curacao, Panama, Colombia, Venezuela and Aruba 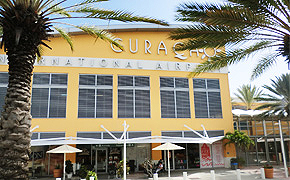 This is our first cruise and I am so excited that I've packed an entire week in advance.
We are going on a seven day cruise to Panama, Colombia, Aruba, Venezuela and back to Curacao. We caught the ship in Curacao of course, and arrived there a day before, so that we could spend some time and have some fun.

With the normal simplicity that comes with modern technology, we checked in online in advance and boarded the Suriname Airways flight to Curacao. It was not a long flight, about an hour and a half and more importantly it left on time.

We sailed through immigration on arrival in Curacao and in no time we were in a taxi headed to Blue Skies Helicopter and Car Rental to pick up our car, which we had booked in advance. 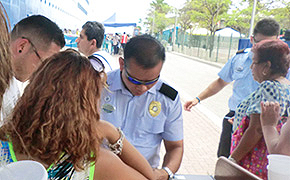 We drove around Willemstad for a couple hours and then checked in at the Hilton Hotel, had something to eat and drove around some more. Our seven-day cruise had begun with our stay in Curacao.

The next day we got up, had breakfast, returned the car and headed to the dock to board the ship. Incidentally the car rental company was about an eight minute walk from where the cruise ship was docked, this was very convenient, but we did not plan this we were just fortunate.

Walking towards the ship in the bright Caribbean sunshine we were both filled with joyous anticipation, not knowing what to expect.

The check-in process was fairly simple, passport, baggage check-in, immigration check and then on to the ship - The Pullmantur, Monarch. It was built in 1991 and refurbished in 2013. Passenger capacity is 2,752.


If you're like Nikks and I then you're always looking for the best Caribbean cruise deals. Right! Check out these deals. You might be surprised! 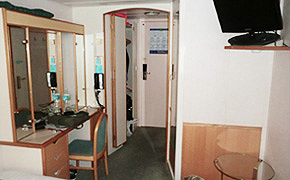 On boarding the ship we were directed to reception where we were issued our ID cards - Now folks your ID card is like your passport on this cruise, you get on and off the ship with it and you use it to make purchases on the ship as well.

You are required to open an account with cash or a credit card. This account is linked to your ID card so if you need to make any purchase funds are deducted from your account using your ID as verification. Also at this point you have to pay the ship gratuities (Services taxes), which was US$90 each.

We both agreed that the process was not flawless, but it is not cumbersome either. We were all set to begin our maiden voyage.

We found our way to our cabin. Now, as mentioned before, this is our first cruise so we did not know what to expect. First, let me say that the cabin was not tiny, but it was compact. We found throughout the trip that it was comfortable enough for the two of us. Our cabin was located on the eighth deck and was an exterior cabin with a partial ocean view. The size of the cabin is 122 square feet or 11.33m2. 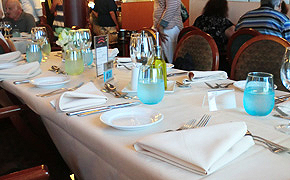 After we had settled into our cabin, we decided to take a look around the ship before we went to dinner - we had a set dinner time - the early seating is at 7:30 p.m. and the late seating is 9:45 p.m.. We chose the 7:30 sitting when we purchased our cruise package; so this was our assigned dinner time for us each night. For the duration of the cruise, we were also assigned the seat at the same table each night as indicated on our ID. Told you that ID was important!

The Boreas is the main seating restaurant, located on deck 4, it serves continental cuisine and we found it delightful. The tables were always well set, the food was good and the waiters were polite.

Every night the menu was different and sometimes were based on the cuisine of the approaching port of call. Hey! The sherbet was divine, also the sugar free ice cream according to Nikks. The Panorama is another restaurant on deck 11. It serves the same menu as the Boreas for dinner, but in buffet style. This is where you will also have buffet style breakfast on mornings. 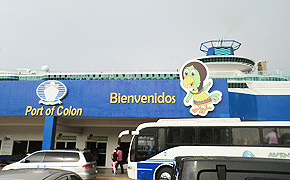 Our first port of call was Colon in Panama and we arrived there on the second day of the cruise. This was not much of a thrill for us because we had visited there already and seen the Panama Canal and other attractions.

Any ways! We were supposed to go on an Aqua-Bus trip - This is an amphibious bus that gives you a tour of Panama on both land and sea. Was really looking forward to doing this, but as it worked out we did not have enough time to do it and reach back to the ship on time. So instead we took a tour to Albrook Mall in Avenida Marginal, Panama City. The mall is huge. It has over seven hundred and fifty businesses including supermarket, cinemas, pharmacies, casino and food courts.

Nikks got in a tiny bit of shopping but other than that, we basically just visited shops, ate some food and then it was time to head back to the ship. We had about five hours shore time, but the drive from the ship and back took an hour each way. So we were left with just about three hours, which went by so quickly. 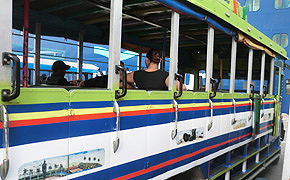 Back on the ship, sailing on the seas and heading to Cartagena, Colombia.
Later that night we had dinner and headed to club Cyan to have some fun. While the club DJ plays all types of music, Latin American rhythms are the prevailing music. Genres like Reggaton, Rhumba and Salsa were mostly played . Hey, we enjoyed it anyway, learning a couple steps from those on the dance floor.

The next day we arrived in Cartagena, Colombia. Our excursion for this port of call was a tour of Cartagena on the Chiva Chiva bus-rumba. It's a tour on a very colorful bus with open bar serving national drinks and rhythm of a live band.

While all of the songs were in Spanish the universal language of music and rhythm made this one fun filled trip. During the trip we made a couple stops that included Castillo Grande and the walled city, we also stopped at Las Bóvedas to look at handcrafted items and souvenirs. Before we headed back to the ship we had some snacks that included arepas and empanadas. 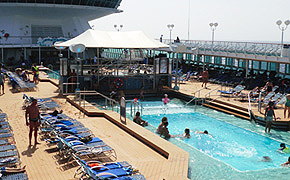 On the fifth day we were at sea all day so we did what any first time cruiser would do, we enjoyed the bars and the pool deck, where there were always lots of fun activities daily and made several trips to the food court of course.

We also got in some sports. Nikks and I had a couple friendly rounds of table tennis, played basketball and tried our hand at a game called shuffleboard.

After a full day of activities, but with energy still to burn we went to Cyan club and partied like there was no tomorrow. Next stop Aruba!

We arrived in Aruba a bit sad as we knew that the cruise was coming to an end. Just one more day to go. Anyway! We decided to make the best of the last days.

Our excursion in Aruba was spent at De Palm Island. Yes it's actually a resort on an island in Oranjestad. It's the only all-inclusive resort on the island and included in the days package was the use of the water park, snorkeling equipment, the banana boat ride and of course all you can eat buffet and drinks.

Nikks and I always wanted to learn to snorkel, so we said we will give it a try. It didn't work out. So we tried some other activities including her on the banana boat and both of us on the water slides. Later she insisted that we give the snorkel thing another try.

The second time we got the hang of it and it was really a great experience. We saw some really beautiful fishes. It was amazing. After a full day of activities the bus arrived to carry us back to the ship. We had a lot of time before sailing so we decided to walk through Oranjestad and take in some of the sights. We would have loved to spend more time in Aruba. La Guaira, Venezuela here we come!

DON'T FORGET TO CARRY THESE ON YOUR CRUISE. 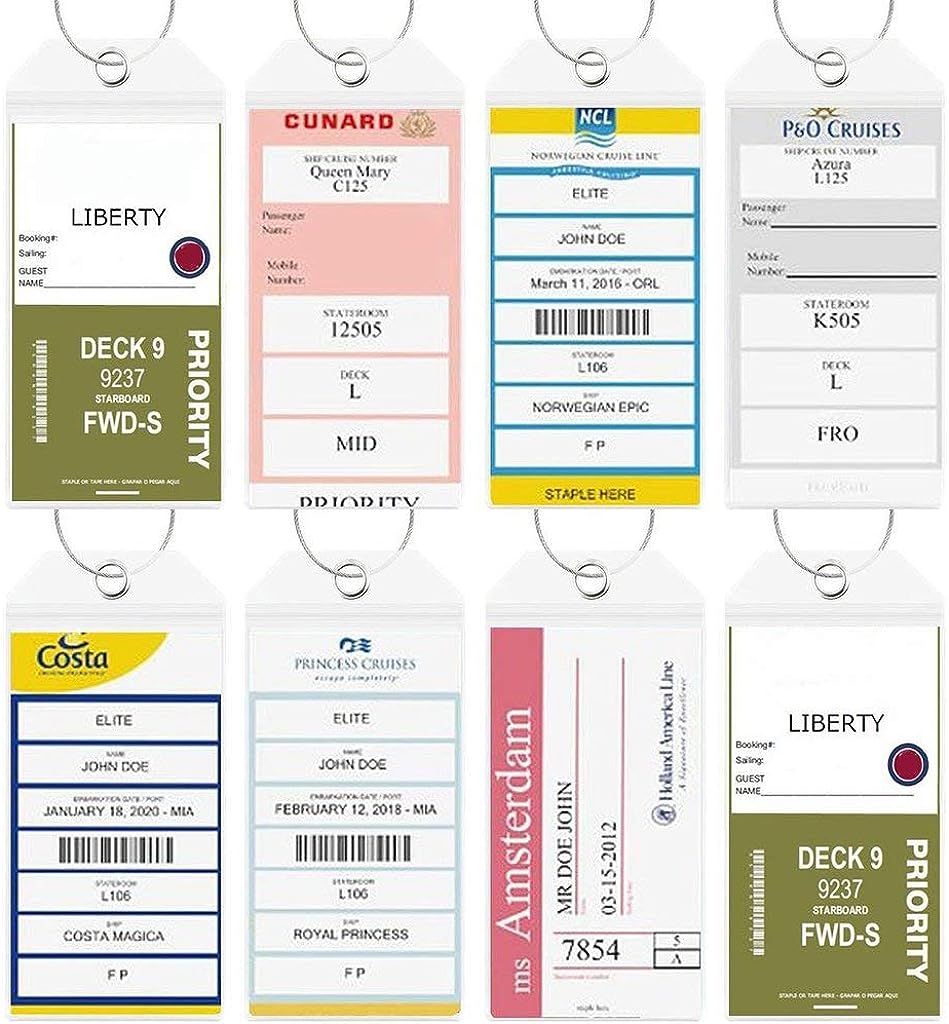 La Guaira, Up the mountains 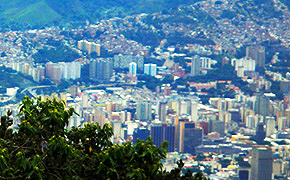 Our last port of call before we headed back to Curacao was La Guaira, Venezuela. Our excursion activity was a visit to El Avila National Park, a cable car ride and a drive through Caracas. We drove up the mountains to about 2100 meters to take the cable car. The place was a beehive of activities.
There are a lot of shops selling craft items, food and other Venezuelan delicacies like sweets and tasty churros. There is also a hotel located on the compound.

The view from up there is really breathtaking. Before we got on the cable car we had some local food and a hot cup of chocolate. It was really chilly up there.

After the cable car ride we drove through the city of Caracas a made our way back to the ship. Sadly, we were heading back to Curacao.

Yep, all good things come to an end. Back to Curacao. The good thing is we had some time to spend in Curacao because our flight was in the night. We basically just lazed around the pool and enjoyed the beach and the atmosphere at the Hilton.
Our flight left on time and we were on our way home. It was over!

What we liked:
Check-in: Not too cumbersome
Cabin cleanliness - Cleaned at least twice a day
Food: A variety, tasty and lots of it
Drinks: Alcohol including wine and non alcohol - lots of it
Staff: Courteous and always willing to help. Most spoke English

What we did not like:
No steam iron in cabins - You have to pay to get it done
No ice machine on the deck
Phone in our cabin located where we kept knocking it over
While English is spoken, during activities and other events only Spanish were used

Would we go on a Pullmantur cruise again?
Yes.

You may also like: 20 Photos that will entice you to go on a cruise 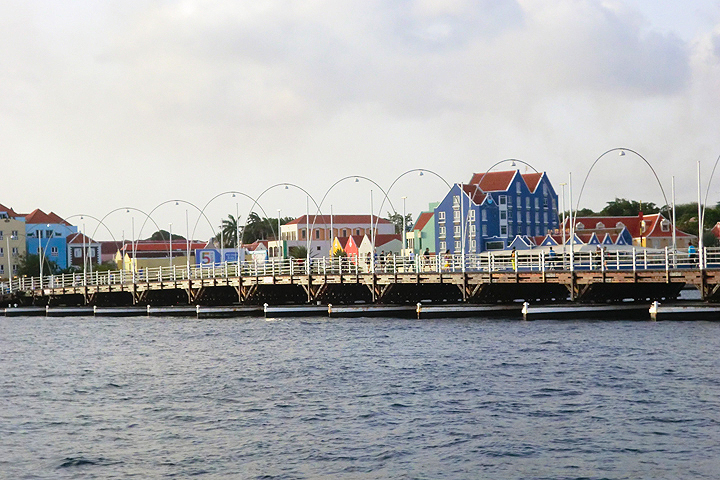 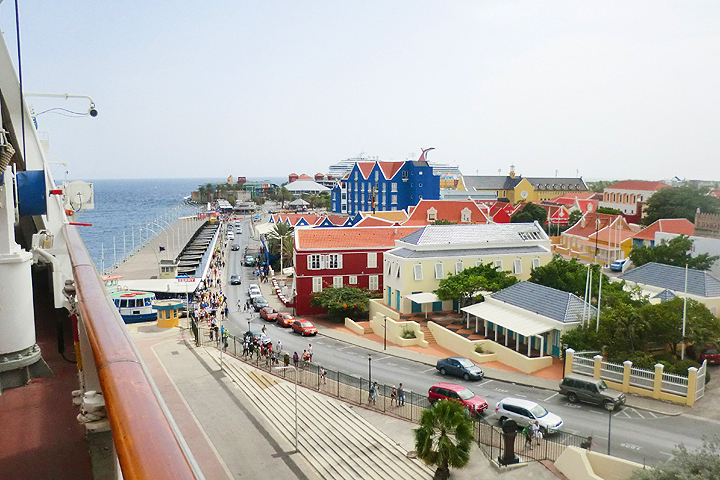 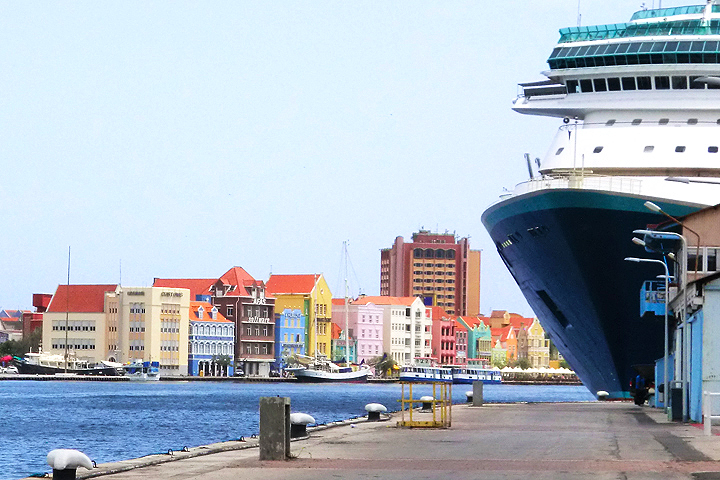 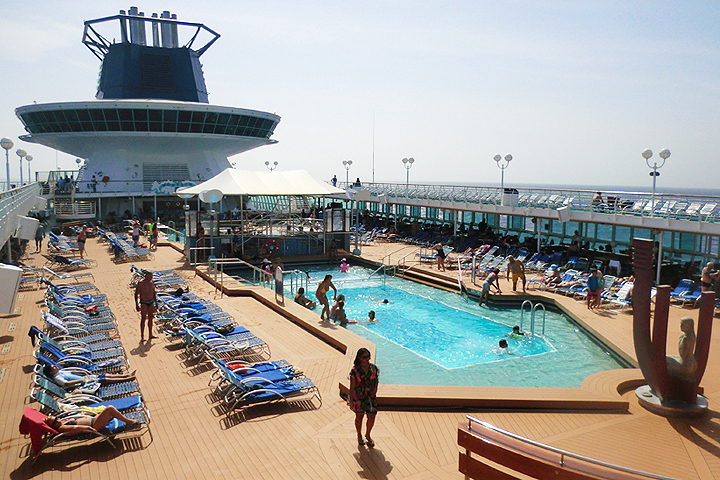 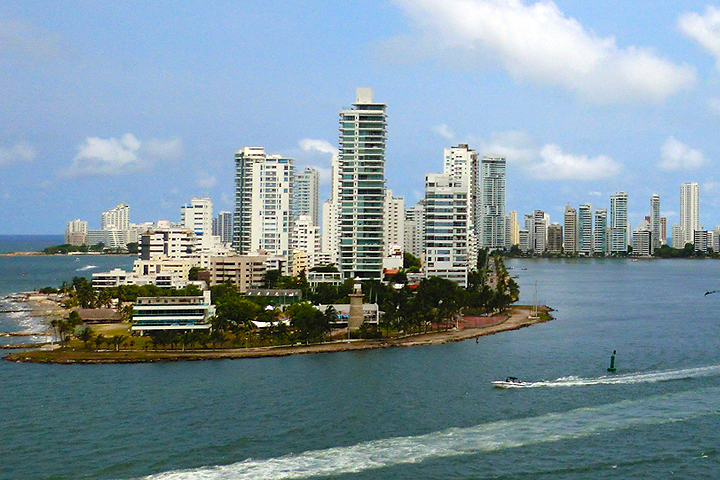 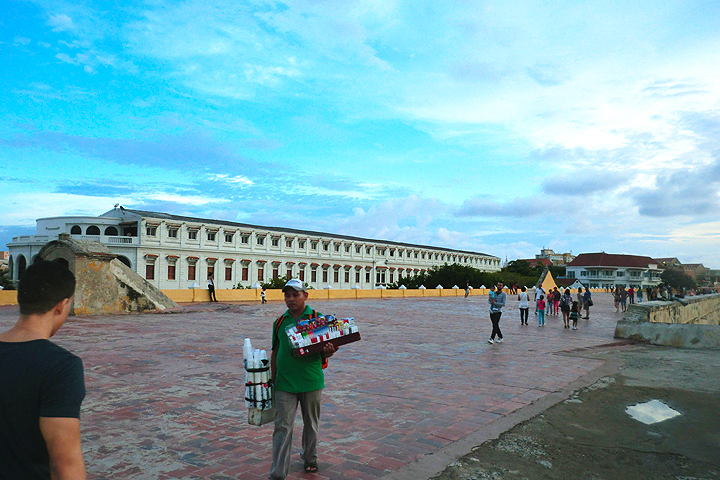 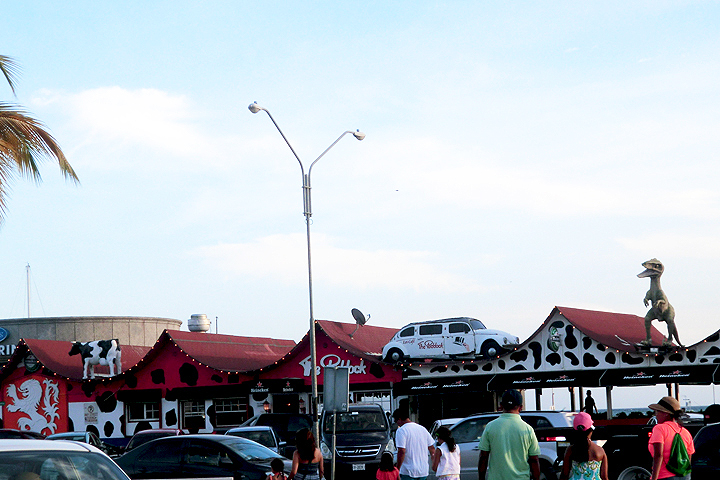 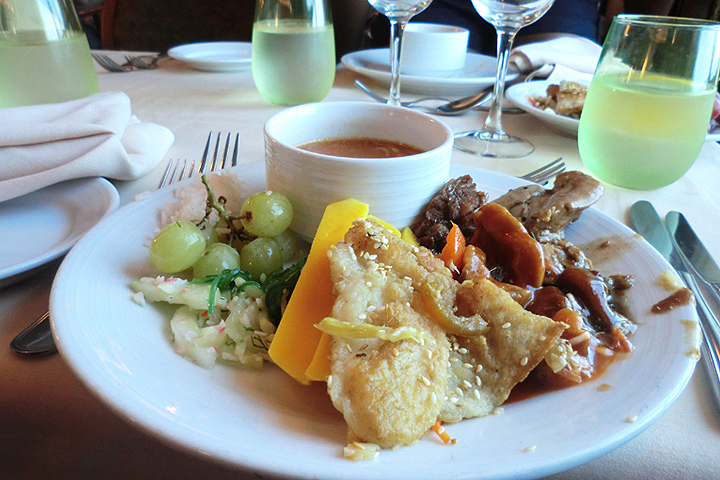 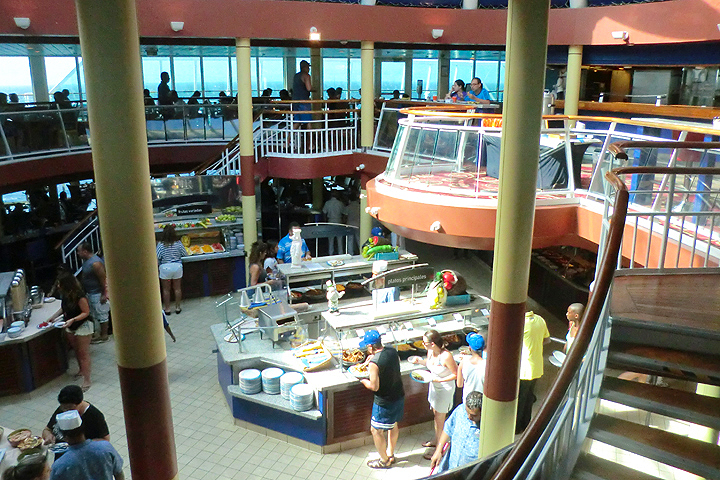 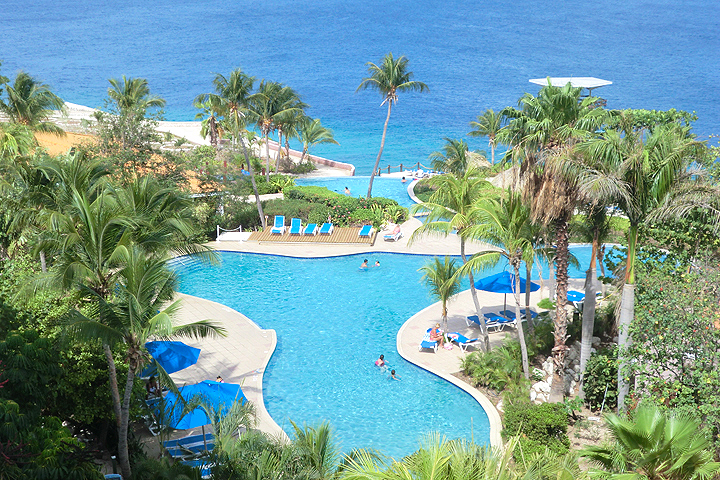 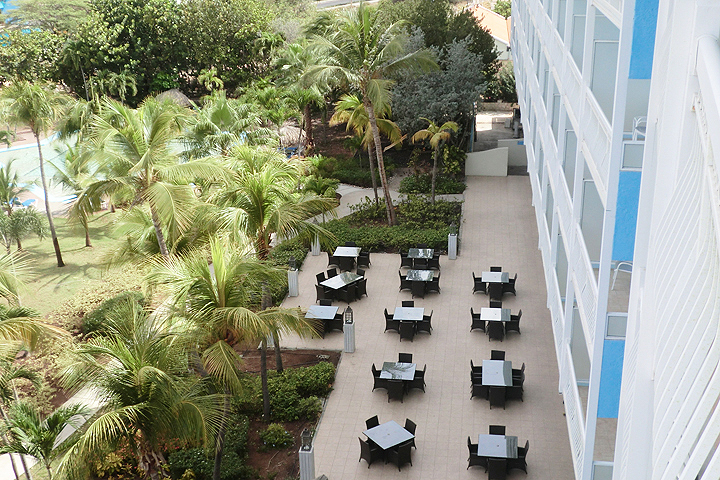 Check out our Pullmantur Cruise to the Caribbean video on YouTube.


Check out our second cruise on board the Costa Magica to Santo Domingo and Catalina Island in the Dominican Republic, St Maarten/St Martin, Fort De France, Martinique and a first time visit to St John's, Antigua and Barbuda.

Check out our Costa Magica Cruise to the Caribbean video on YouTube.

The most beautiful cruise ship ports in the Caribbean


CHeck out our hotel section