Hi there! Just so you know. This page contains links to product and services from one or more of our affiliates. Please note that we may receive compensation when you click on links to those products and services.

We are excited. The thought of going on only our second cruise filled our hearts with unconditional joy. We counted the days and awaited the adventures that lie ahead.

We would be visiting several Caribbean islands for the first time including Santo Domingo and Catalina Island in the Dominican Republic, Martinique, Guadeloupe, St Maarten/St Martin and Antigua and Barbuda.

Actually, I did visit Antigua and Barbuda before, but it would be the first time for Nikks.

It was 5 a.m. on December 18th and I was ready to enjoy the adventures that lie ahead. Nikks and I arrived at the airport and boarded our Caribbean Airlines flight to Barbados. It left on time and we arrived in Barbados in just under an hour. 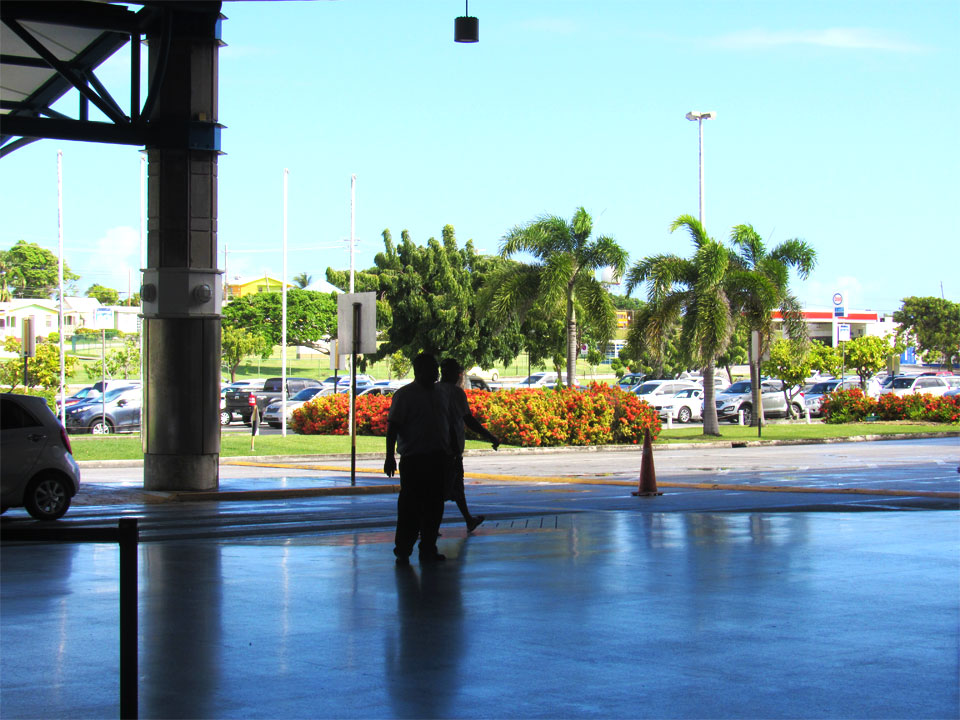 Barbados to Dominica and the shocker

We boarded the flight from Barbados and arrived in Dominica a little less than an hour later, disembarked and headed to the baggage collection area to collect our luggage.

The airport in Dominica is small so we could actually see the baggage handlers unloading the airplane from inside the airport terminal.

Alert, we kept looking for our bags, but could not seem to find them. We kept our eyes on the gentlemen offloading the airplane to see if they had our bags. After about 10 minutes of waiting, we were told that there were no more luggage on the plane and that was it.

We stood in shock as we were now experiencing a traveler's worst nightmare, the loss of one's luggage.

What annoyed us the most was the nonchalant manner that it was done. There was no official making an announcement or no sympathy from anyone at Liat or any of their representatives. We just heard the baggage handlers say that there were no more bags on the airplane.

We searched the baggage area several times to make sure that we did not miss our bags and we realized that they were not there. So with frustration now at its peak we headed to the counter to find out what went wrong, where is our luggage, and when are we going to receive them.

Trust me folks, there is nothing that will get you angrier than officials or workers who can't answer your questions. They did not know what happened to our luggage, or so they said and had no idea when we would get them. Now that did not go down too well with Nikks. I could see the pleasantness of her face turned to bewilderment and then to anger. The thing about Nikks is her war face, while serious it is still welcoming ... well most times.

The questions came quickly and I could see the officials struggling to give answers or for a matter of fact, give the correct answers or worthwhile solutions. The scenario is, we had a flight to catch out of Dominica in 45 minutes and we needed to get this sorted. Somehow we felt if we did not have a resolution to our liking we probably would not see our luggage again. 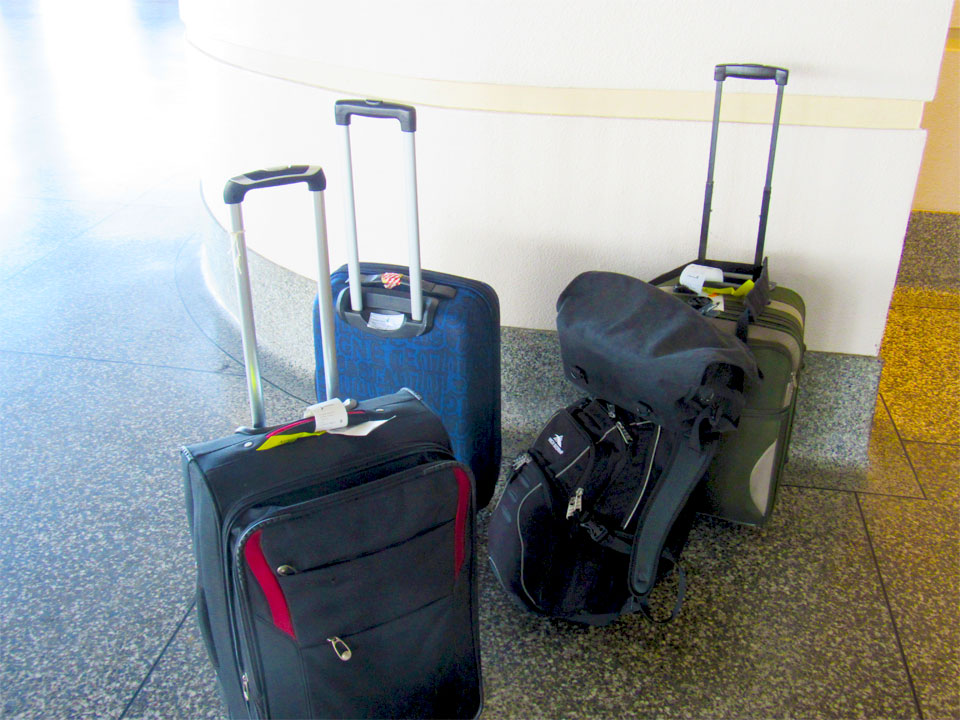 So, we were given a form to fill out with the details of our luggage, how much suitcases, size and colors. This form would also be used to determine the cost of compensation if our luggage was not found.

So after we got through filling out the form we met with another official and Nikks told him that we are heading to Guadeloupe and asked how will we get our bags if it does indeed arrive on a later flight, which we were informed it might.

His answer was that it would be forwarded to Guadeloupe. Not satisfied she countered, “So how would we get them when they arrive in Guadeloupe?” Before he answered she commented in a firm voice, “we are not going to pay a taxi to go back to the airport in Guadeloupe to collect our bags.”

The official eventually admitted that it is not our fault and he would make sure that it is delivered to our hotel. Now, we took his word and the day before we left Guadeloupe we were indeed surprised to get a call from the front desk of the Pierre & Vacances Village Club saying that our luggage was delivered.

I am really disappointed with myself that I can't remember the gentleman's name, but we would like to thank him for his assurance and for keeping his word. Hats off to that employees at the airport in Dominica.

... And now the harsh lessons

So while we were in Guadeloupe we missed out on a lot of activities because we did not have much clothes, with the exception of those on our backs, and a few items Nikks had in her carry on. My backpack is normally reserved for cameras, Ipad, phones and chargers because you don't really want to put those items in your check-in luggage. So, we would like to thank Liat airlines for the harsh lessons they have thought us. Which are:

... When traveling on Liat expect the flight to be late, but also know that they can also lose your luggage. Imagine you're in a beautiful country like Guadeloupe and the hotel you're staying has an amazing pool, but because you have no clothes and especially undies you can't go for a swim. No! We are not allowed to swim naked. This is not Corniglia Beach in Italy.

... Because your luggage maybe lost, you should always pack a couple extra undies in you backpack even if you have to stick it between your Ipad and your expensive cameras. Who knows your equipment may come out looking sparkling clean with the constant rubbing of the cotton and silk fabric on them.

... Do not expect officials of the airline to care about your misfortune. Just assume it is not important to them because they will continue on their merry way and not give a hoot … you know what I mean right!

... Do not expect officials at the check-in counter to know what they are talking about. In Barbados the clerk at the Liat counter asked us if we bought travel Insurance for Guadeloupe. She insists that we must have it or she could not let us travel to Dominica. I just could not understand. We are going to Dominica with Liat, why do we need to have travel insurance for Guadeloupe? Interestingly, we were going to Guadeloupe with another airline from Dominica.

When we do our research we always check these things out and we did not find that it was mandatory to have insurance to travel to Guadeloupe, it may be wise, but not mandatory.

Despite the fact that we showed her we had insurance for the flight she kept insisting that we needed insurance to go to Guadeloupe. I was quickly becoming anxious with the situation and then this turned into frustration and then to panic.

It then turned to anger when she tried to sell us insurance with Liat, which as I mentioned we already had. We were in the airport for five hours and this clerk just wasn't making it pleasant at all.


We also took insurance for the hotel stay and we also had pre cruise insurance which covered us if anything happened before the cruise.

Up to this day Nikks reminds me of how frustrating it was and how annoyed I was with the situation. Anyway the clerk eventually spoke to her supervisor who came and informed us that it was not an issue. So, we eventually boarded the flight and headed to Dominica.
When we did arrive in Guadeloupe we did not even need to fill out an arrival form. All we were required to do was show the immigration officer our passports, which were stamped in less than three minutes and we were on our way.

After returning from a wonderful cruise, visiting several wonderful destinations and having a jolly good time we were horrified that we had to deal with a two hour delay from Liat ... AGAIN! Lesson learned! 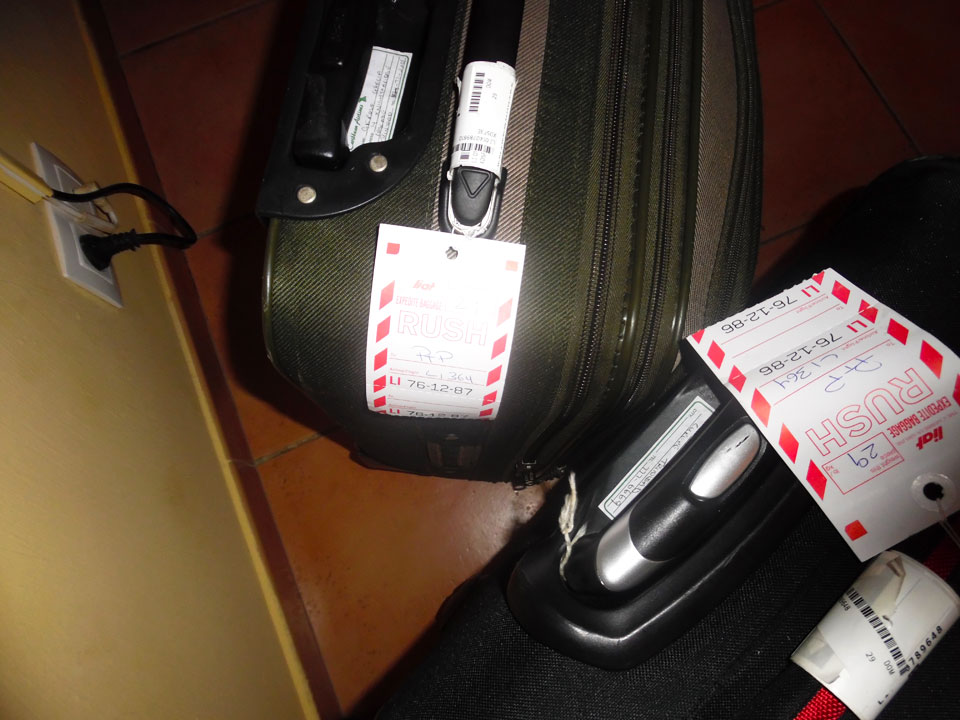 TRAVELING SOON? THEN WE RECOMMEND THESE CARRY ON SUITCASES:

Have you ever lost your luggage while traveling. How did you deal with it?

A sharp looking man gives himself a lot of opportunities while traveling. ...

Nikks and I both agree that St Maarten/St Martin is one of ...

Utterly amazed by Los Tres Ojos thrilled by Santo Domingo
The first look we got of Santo Domingo, the capital of the ...