These Are The Things We Did In Guadeloupe


🔽 DEAL ALERT!
Get up to 20% off selected Guadeloupe hotels!

The French-speaking Caribbean Island of Guadeloupe really surprised us. It's the fastest we have ever been through any immigration checkpoint since we have been traveling. It took as little as three minutes. No arrival forms to fill out, just presentation of passports.

Its currency is the Euro, US dollars are not widely accepted, but what captured us the most is the warmness of the people we met, the vibrant and colorful scenery at the local markets and the beauty of the island.

It's the Caribbean, but like Martinique, which is another French-speaking island and a French overseas territory as well, you cannot miss the French influence. It's like France in the Caribbean. Everything is French, from the banks to the telecommunications providers to the design of the street signs.

We arrived at the Pointe-à-Pitre International Airport, also known as the Pointe-à-Pitre Le Raizet Airport and delightfully flew through the immigration gates having had a frustrating day of flying. Fortunately, we did not have to fill out any arrival forms as I mentioned before, and all we were required to do was present our passports.

Maybe it's because our country has a mutual visa waiver agreement with Schengen Area countries, which allows us to travel visa free to Schengen states, associated countries and some territories. Whatever the reason we were pleased. 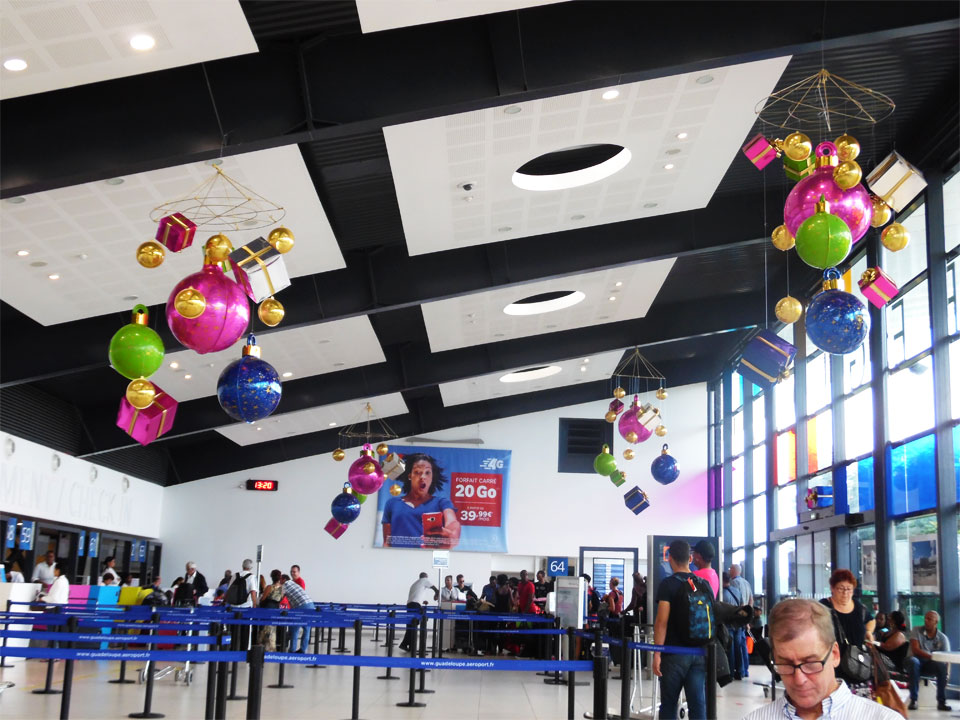 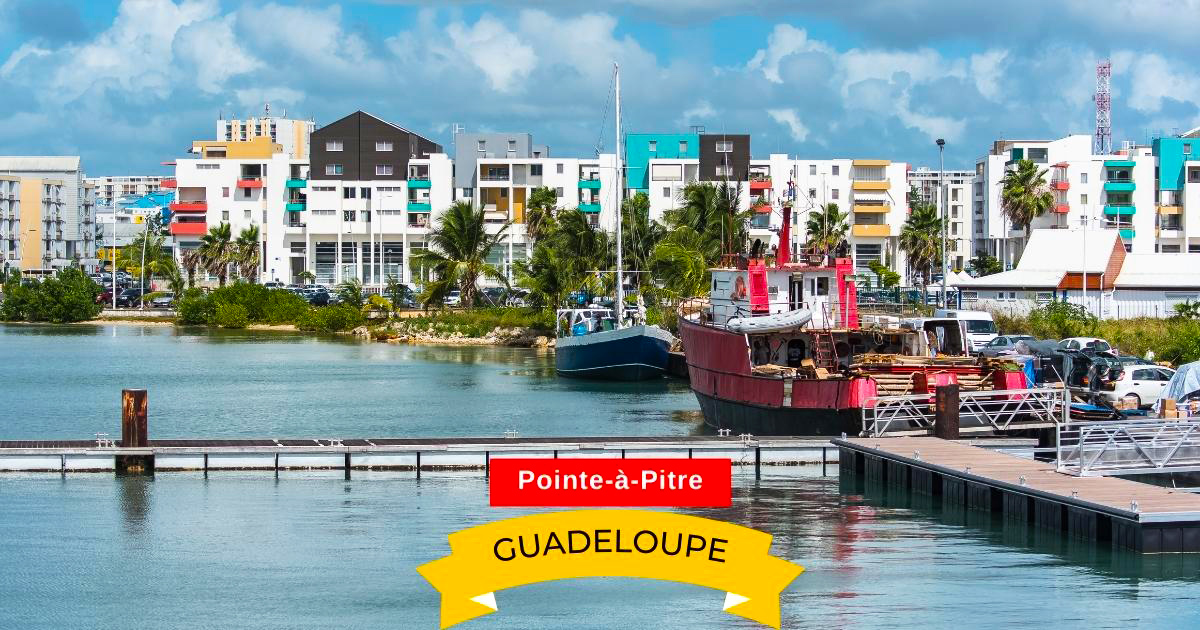 Euros yes! US Dollars ... not so much

The beautiful airport and the ease of our entry through immigration went a long way in helping wash away some of the stench of the frustrating events that followed us throughout our day of traveling. Unfortunately it was not over as we soon found out that none of the taxis at the airport would accept US dollars. Incredible!

We later found out that since Guadeloupe is a French overseas territory their currency is the euro. I was amazed that they would not accept the US dollar because the last time I visited France and several other European countries they accepted US readily.

Anyway, so the frustration continued. We even tried to rent a car and it looked like we would get it, but they too would not take our US cash. We eventually went back to where the taxis were, met an English-speaking taxi driver, pleaded our case and he spoke to one of his colleague who eventually agreed to help us. We would eventually pay US$70 for the trip.

Happy to be in a cab headed to our hotel, we could not wait to check in and have a bath and relax. It took about forty-five minutes to get to the hotel. When we arrived at the hotel more frustrations. You can read about that in our review of the Pierre & Vacances Villages Club.

If you're visiting Guadeloupe these are some of the tours you must do. 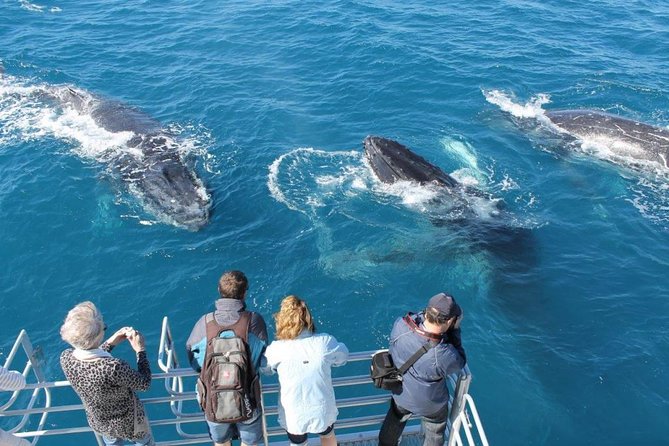 We will be going a couple of miles off the coast of Dehaies and checking out the beautiful different whales that are swimming and feasting in Guadeloupe's waters. 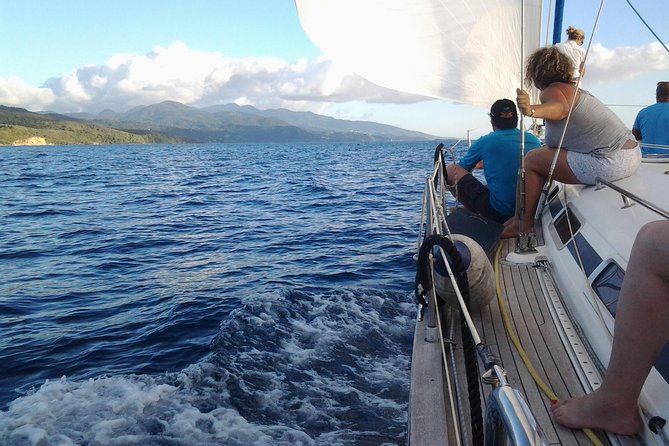 Deshaies, on the Caribbean coast of Guadeloupe, is known for its beautiful sunsets.

There is nothing more tranquil or romantic than sailing across this scenic coast as the crimson sun dips into the deep blue waters of the Caribbean sea ... 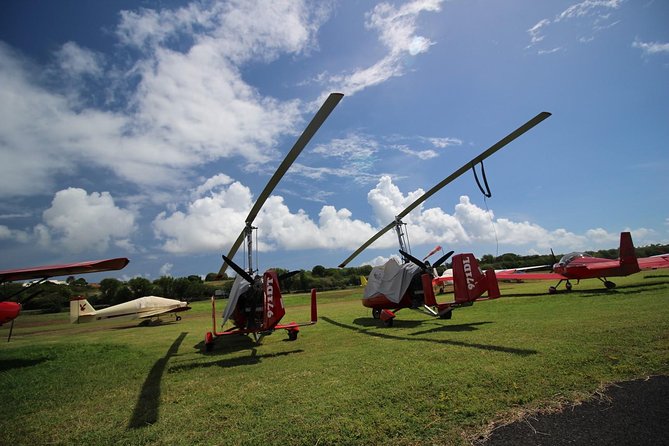 Aerial Excursion Of Petite Terre And The Desirade Gyro Plane

Take a beautiful and long aerial tour of the isolated and secluded island of Petit Terre and the not to distant island of the Desirade.

This is a really special aerial tour with fantastic highlights of the coast of Guadeloupe ...


Visiting Sainte Anne, the market and drinking that rhum punch

The dawn of a new day brought a new canvas for us to paint a better picture. A new island to explore, our bellies filled, bright sunshine and charged with endless hope, we took a shuttle from the hotel and headed to spend the day in Sainte Anne.

It is a city in the southern part of Guadeloupe on the island of Grande-Terre and is considered by many as the most popular tourist town in the Guadeloupe.

Our first stop was at the ATM to get some much-needed euros. By this time we hoped that all we had put in place with our cards back home would deliver the required benefits … and it did as we got some much needed cash and the day was now looking much, much better.

We then headed to a supermarket to get some much needed personal effects because we arrived without our luggage in Guadeloupe thanks to Liat airlines, yep; they left our luggage behind in Barbados.

We strolled along the N4, which is like a main roadway in Sainte-Anne. There are a lot of colorful stalls and the St Anne Market is located along that stretch as well. The road is just meters from the seashore and serves as the backdrop to the market.

We visited several shops and made some purchases. We also visited a couple more shops and one that stood out was Sunrise boutique located at 4 rue Dandin. They have some really beautiful and unique stuff and all the items are their original designs. Sandra, the owner was really friendly and we spent some time chatting with her about her designs. 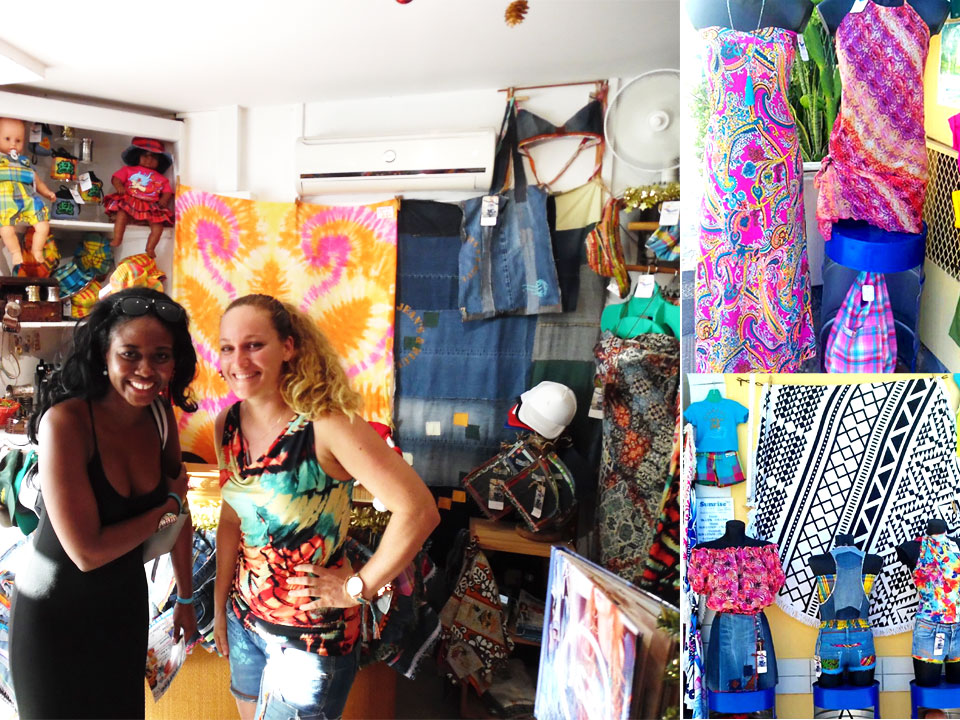 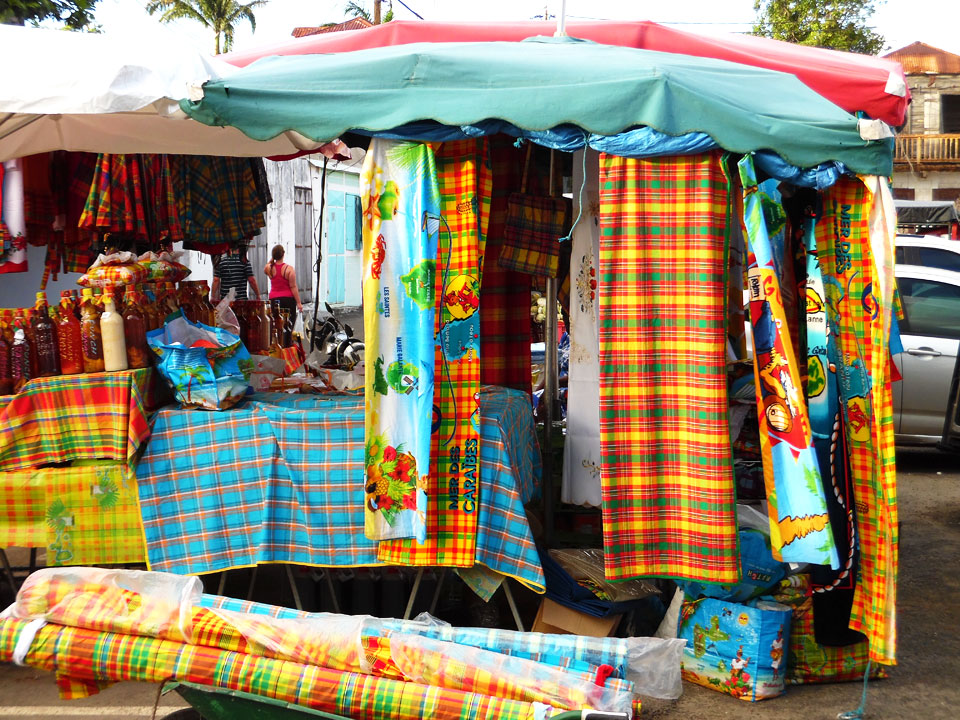 We headed to the Sainte Anne Market and the colorful displays excited us. You can get fresh produce, fish, rhum (rum) beverages, spices, clothes and many other items in this market.

We picked up a couple t-shirts and some shorts for me. We then stopped at one of the stalls offering alcohol beverages. They were wrapped in colorful bits of cloth. The appearance is guaranteed to entice anyone, even if it's just for the sake of curiosity.

We were given several samples at one of the booths. The concoctions are endless and included rhum and pineapple, banana, coconut, strawberry and other ingredients mixed to create a unique tasting rhum punch. By the time we were finished with the samples we were … let's just say happy.

We eventually bought a coconut and rhum mixture and dealt with that the same afternoon at the hotel. We paid 10 euros for the bottle and thought it was well worth it. We loved the coconut mixture so much that when we returned from the cruise we got a bottle at the airport and celebrated Christmas all the way home with that concoction.

The beauty of St Anne is the fact that the beach is so close to the main road. It paints such a beautiful picture. We loved walking along the shoreline and enjoyed the beautiful weather. After spending several hours in Sainte Anne, we headed back to the hotel. 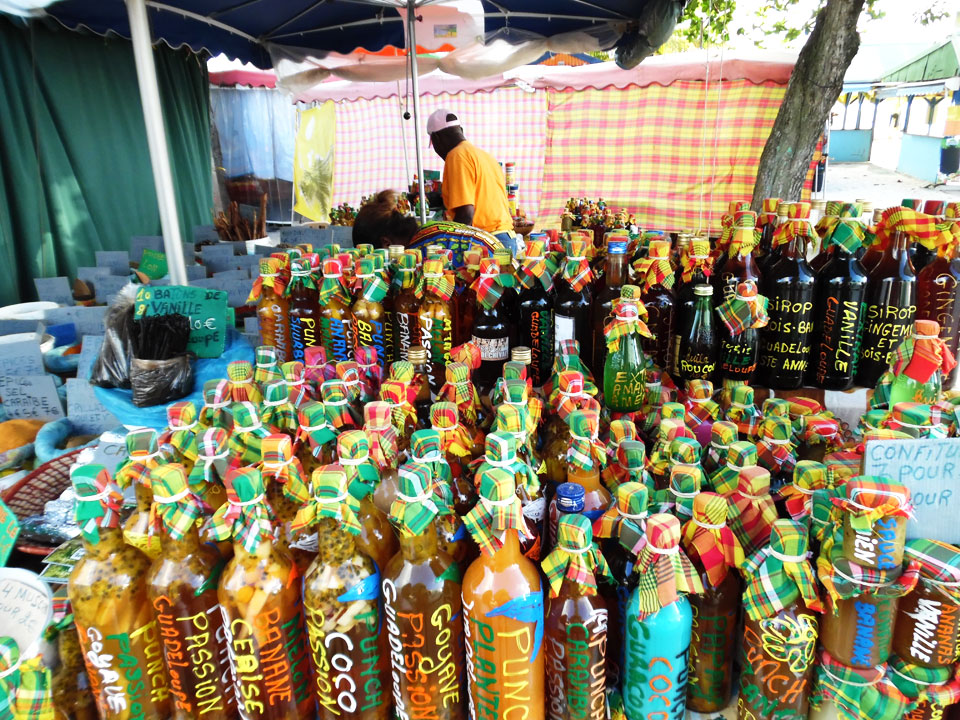 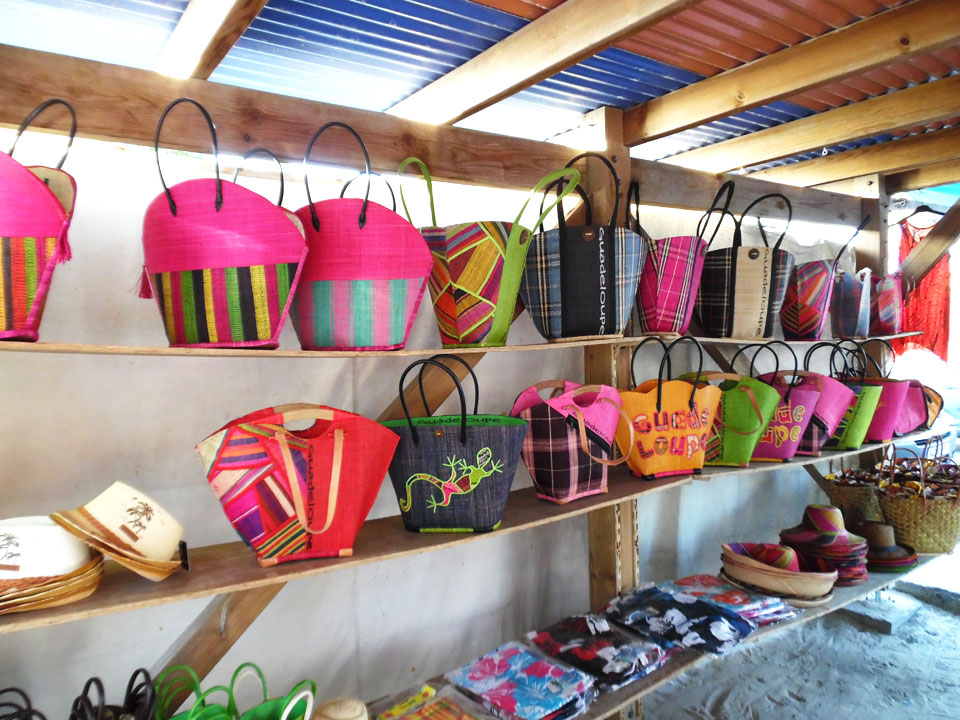 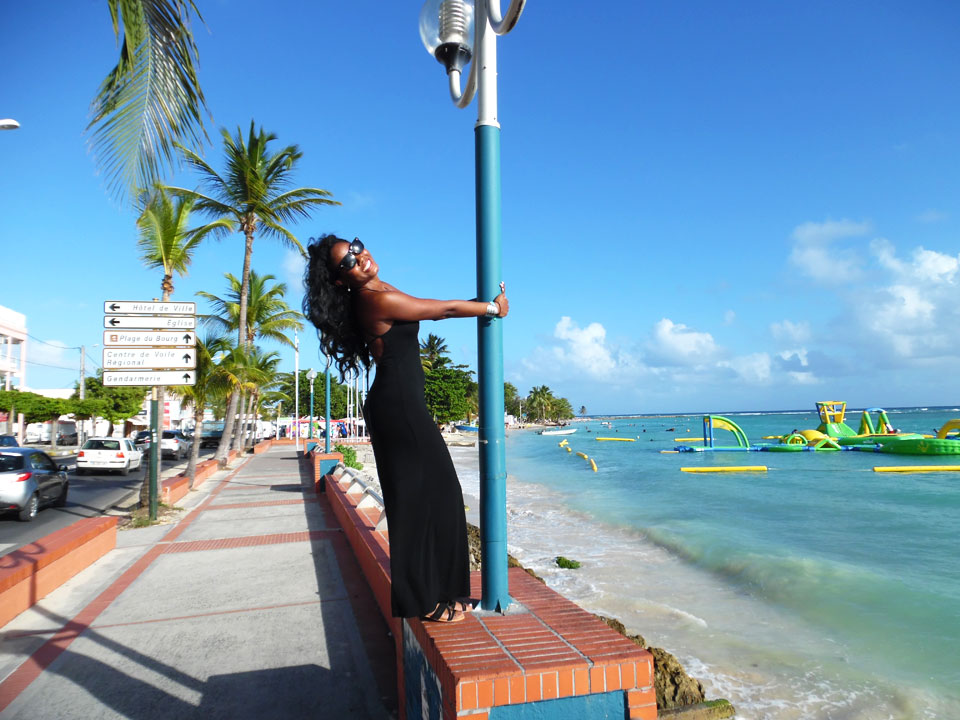 The next day we took the shuttle to Saint-Francois, which is located on the south side of Grande-Terre. It is described as a seaside town with a bevy of sandy beaches.

Our first stop was the supermarket to stock-up on some water. Then, we decided to choose a direction and just follow the road. We eventually ended up at the Marina of Saint-François and spent about an hour enjoying the scenery.

The marina has several seafront restaurants, shops and a nautical center. You can also take the ferry there to several islands including Les Saintes, Marie-Galante, La Désirade and Petite Terre.

We left the marina and continued walking without any aim until we arrived at the Rue de la Republique and followed this road, which was lined with several restaurants and bars. Having spent several hours in the Caribbean sun we decided we would take a break and get some refreshments and some lunch.

We ended up at Restaurant Les Pieds dans l'Eau. It is a typical Caribbean style restaurant with Gosier beach in the background and serves mainly local food. 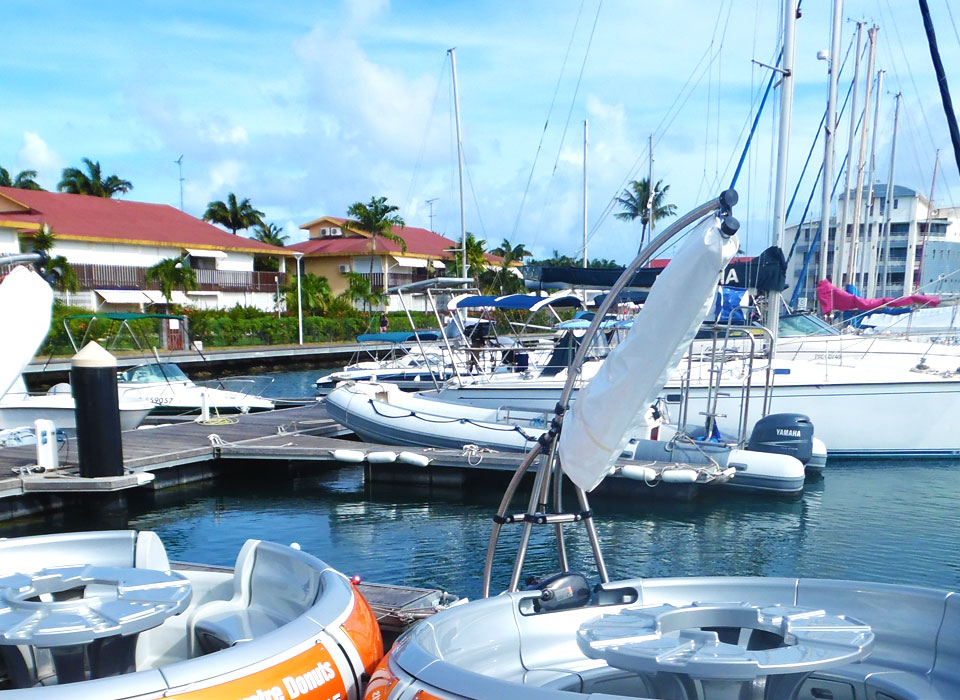 After a quick perusal of the menu, Nikks decided to have the curry goat stew and white rice. I was not really hungry, but I did try the infamous TI Punch. It is a drink that is popular in Guadeloupe and other French speaking islands including Martinique, Haiti and French Guiana as well.

It is a mixture of rhum, lime and syrup, however, sugar can replace the syrup as was in the case when I tried it. That is a really strong drink, but the experience was … well had me happy all day.

Restaurant Les Pieds dans l'Eau seems to be a very popular place, it was always filled to the brim and as soon as one group of people left more were ushered to the available tables. We liked the services.

After we finished and went to pay our bill, we were offered a free departing drink. There was an assortment of rhum on the bar counter and we were asked to choose any one we wanted. Instead, we asked the barman, Dom to mix us a special. We don't know what it was, but we knew it had rhum. It tasted really good. Trust me, the next time we are in Guadeloupe we are going back to that place. 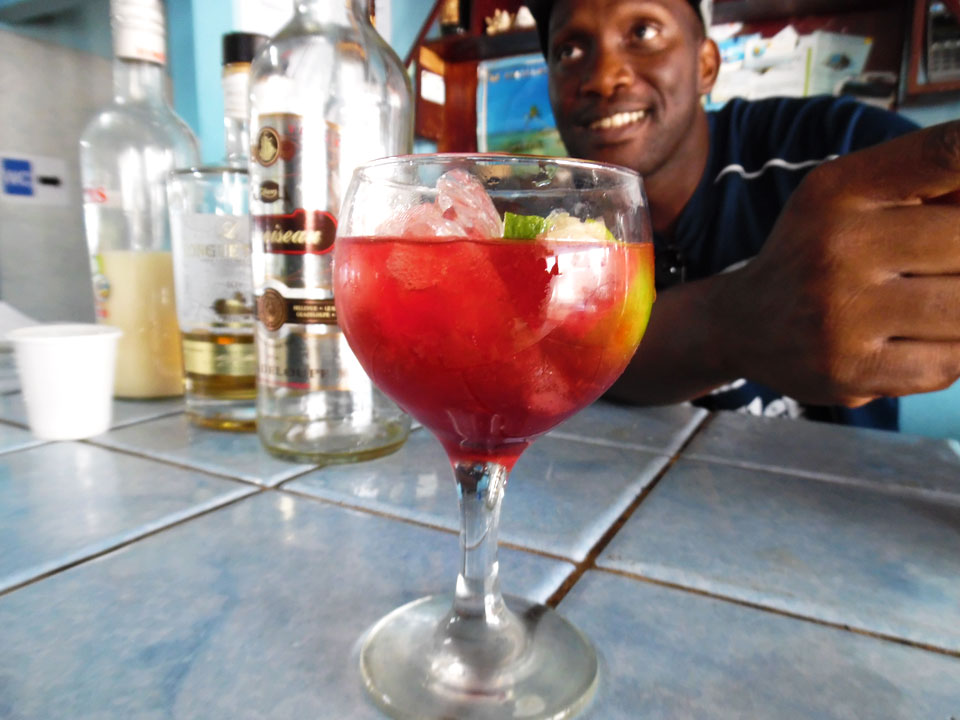 That pretty much sum up our two days in Guadeloupe. It definitely was not enough because we did not get to visit the other islets or spend any time in the other towns, but a return visit is definitely on the cards because Guadeloupe is the French Caribbean's best kept secret.

If you are visiting Guadeloupe remember:
The official currency of Guadeloupe is the Euro. The US Dollar is not widely accepted.
They use European standard electric sockets so walk with your adapters.


TRAVELING SOON? THEN WE RECOMMEND THESE TWO-PIECE LUGGAGE SETS: 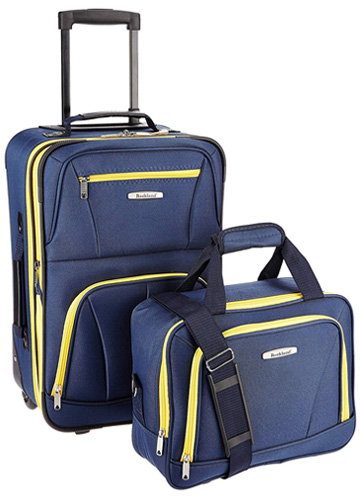 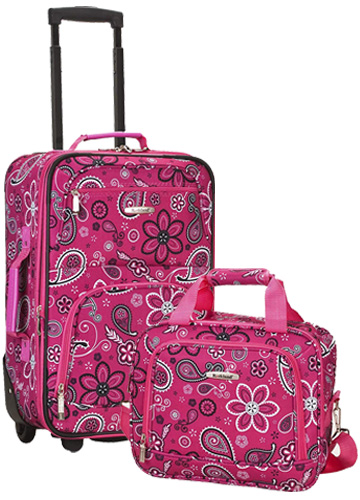 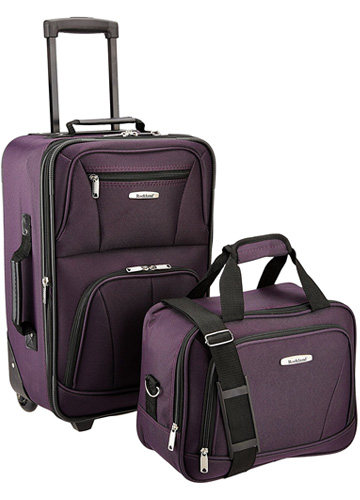 
Have you ever visited Guadeloupe? What did you love about the island?